Wildlife and Spice Island with Vee and Angelo on Sparky

The first day of our safari is always very good. We have a group of 15 very excited guests who have planned this safari for months and finally they are here and can’t believe that this is actually happening. Reality sinks in when they see the big yellow truck named Sparky.. 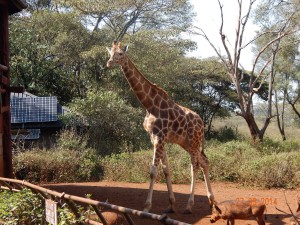 The morning is started off with a visit to the Giraffe center. For most people this is the first time they have come in contact with wild life… their childhood dreams of coming to Africa is now a reality. At this centre you come (literally!) face to face with the Rothschild Giraffes, you get very close and not forgetting the very famous Giraffe kisses! There after a short talk gives you information on these animals and the great work being done at the centre.

As if this was not excitement enough, we then head off to David Sheldricks Elephant Orphanage… one of the most popular activities to do when you are in Nairobi. Here we get a chance to see baby elephants that have been orphaned in the wild and rescued from different places. They stay for a varying amount of time and then later released again into the wild when staff are sure that they will be able to fend for themselves or join a herd. Each Elephant has a story of where it has come from, some have had a very sad start to life but this place gives them a great future.

The day then takes us shopping. We take advantage of the availability of products in this city as where we are heading it becomes more and more difficult to get the fancier things!

This done we head off to our camp where we will be spending the night. Its fun and games putting up the tents as some have never tented before, but a quick demonstration and its easy. Then some chill-out time at the bar as everyone gets to mix and mingle and get to know each other a bit more. Carol and her cooking team get going on dinner which is usually cooked over charcoal, very interesting as most have never done this before either.

Today is the day… Excitement is so much as we head out to “the Mara” to do our first real safari. We are very lucky to be going at this time of year because the annual wildebeest migration is still there. There is no better time for us to go than this. Its always an early start today, making our first stop at the Great Rift Valley viewpoints where there are magnificent sites that will take your breath away.

The journey continues and we are now in Maasai land and the scenery along the way is made up of large herds of cattle, goats and sheep. All of which are very sacred to the Maasai people who solely rely on these animals for their food and wealth. We pass various Maasai villages as well as lots of kids shouting HOW ARE YOU.. HOW ARE YOU MUZUNGU?

At the entrance gate we are greeted by at least 30 or so Maasai women selling their different wares. Its always fun and games negotiating with them! 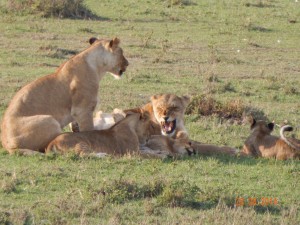 Most people spend months or even years watching National Geographic and David Attenborough looking at the wildlife documentaries in the hope that maybe one day they shall come to Africa to see these animals and finally it is now a reality. We start our safari and as expected it was absolutely fantastic. Hundreds of wildebeest everywhere, giraffe, elephants, buffalo, a pride of lions with at least 7 cubs which were between 3 and 4 months old and many other little antelopes. We were even lucky enough to come across the biggest antelope in Africa which is the Eland.

It’s been a very exciting day. We head out to our camp that is just by the Talek river. This place is just outside the park but there are no boundaries or fences so it always makes for a very interesting night. As we arrive at the camp the sky is about to open and even though it’s only the second night for people setting up tents, I can swear that all had it done in about 3 minutes or so… unfortunately the rain didn’t let out until sometime after dinner but before everyone retires for the night we hear all sorts of bush noises. The most common and closest to play around the camp is the hyena, you can’t mistake the familiar “woo-oop” of a hyena, it’s fantastic to hear.

An early start to make the most of the morning as this is the time if we are lucky we get to see the big cats before they have their long siestas. Sightings are spectacular again today as we get to see a pride of lions that had a coalition of 4 males, right out in the open with lots of cubs and lionesses. One could sit for hours and just watch as the cubs play. We encountered a massive herd of elephants, probably around 40 if not more with lots of little ones as well, buffalo were in abundance and a welcome stop over at the hippo pool is always in order. Hyenas, wildebeest, vultures to mention but a few. Food is in abundance at this time of year and we see carcasses all over the place, it’s a predator’s paradise!

The fun doesn’t end here, on the route out we pass by one of the Maasai villages for a tour. Get your jumping shoes on guys cause at this stage the Morans (warriors) do their very famous welcome dance that follows up with the jumping, you will be amazed at how high these guys can jump, its no wonder cause they start from a young age and they usually do these dances at social gatherings where it is said that the warrior that jumps the highest has much favour with the ladies. Maasai are polygamists by culture and we all know the saying while in Rome.. so my guys gear up to see if they will catch the attention of the girls. The Maasai people go into detail about their culture, you go into their little houses which needless to say are quite something to behold with humans and calves sharing the same house. The men go about demonstrating how they make a fire using just two pieces of wood.

We head off to our camp just on the shores of Lake Naivasha, a very peaceful and tranquil setting of the camp. At this stage everyone thinks Angelo, our driver, is my dad! It’s very funny…

There are lots of hippos for those that love them, you can’t find a better place, this lake is home to many of these water giants and we take off for a hippo cruise.

Naivasha is actually home to so many activities. Mountain bike rides into the spectacular and very scenic Hells Gate National Park is always a “must-do”, it truly is one of the best things that I have done! There is also the 1.5km stunning gorge walk after the bike riding. This park is so spectacular that it inspired movie makers to capture settings from The Lion King and Tomb Raider. After 22km of bike ride all are back and very glad that they went. The afternoon is spent relaxing on the green grass. Game sightings are not uncommon at this camp, amongst them waterbuck and the notorious black faced vervet monkeys who given the chance will raid your kitchen the moment you turn your back 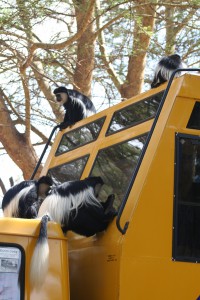 A very relaxed morning for most but the adventure continues for some. 4 of the group go to the Green Crater Lake, again always a huge highlight. On the way up you can get to see some wildlife up close and personal, the walk is great and there are no known predators to the area except for the elusive leopard which you have to be very lucky to spot… we’ve never had any luck here though! Instead we see various antelope and zebra and giraffes

Most of us that have remained at camp and we are privileged enough to be travelling with 2 exercise enthusiasts, sisters Jade and Hayley. We plan on doing some circuits as often as we can. This definitely is no walk in the park but none the less very good. Who knows I might even have some mean abs by the time they leave in a few weeks’ time.

Midday is when we take off from camp and head to our next location in Nakuru. Punda Milia which means Zebra in Swahili (it actually literally translates as stripy donkey!). It’s an absolutely fabulous setting with acacia thorn donning the green grass, but I think the best are the open top showers, so if you take a shower at night you can gaze up at the stars (hopefully it’s not raining!). Chris cracks us all up today by thinking that a female sheep is a GOAT. Ha ha ha.

Next we go game driving in Nakuru….can’t wait!

This entry was posted in i) 24th August 2014 Wildlife and Spice Island with Vee and Angelo on Sparky. Bookmark the permalink.