Time  to leave Uganda and head to Kenya, another new country in East Africa, but after the  sun set cruise (or  booze cruise)  yesterday this morning things are a little bit slow.

We only have 138 km to Malaba border and 188km to Naiberi Overland camp so not too bad because all the group have visas into Kenya already. Kenya is a magical country with a history which reaches as far back as man himself, known as the Cradle of Mankind, this part of Africa has been a melting pot of human society since our early ancestor homo erectus first walked upright on the shores of lake Turkana 3,500,000 million years ago and real history begins with hunters and gatherers.

Over forty two different ethnic groups live together in peace united by the two common languages of English and Kiswahili.It is James’ birthday today, he is turning 29 and the plan here is to celebrate in style. First I asked him what he would like to have for dinner and he remembered that yummy chicken curry we had a while back at Simba campsite and that is what he wanted to have, so we went shopping in Eldoret town which is one of Kenya’s largest industrial towns, originally called 64 as the nearest town was 64km away. Eldoret is the 5th largest town in Kenya and here we bought some chicken, coconut milk, fresh ginger and other  veges. The first thing we did when we arrived at the camp was to decorate our kitchen area, we signed the birthday card and then after dinner it was time for James to blow those candles and make a wish.

We arrived at Punda Millia campsite early and after pitching up tents, the passengers had time for a cold Tusker while still waiting for the new five travellers to arrive from Nairobi with Kanyo, Patrick and Pluto. 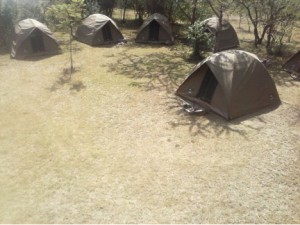 You can see all the tents look empty and there is no one around. It is an early morning pick up at 6am for the game drives in Lake Nakuru National Park, best place for the rhino, flamingos and Rothschild giraffes. The park is 140 km north-west of Nairobi and covers an area of 188 sq km, created in 1961, the ecosystem comprises of the lake, surrounded by mainly woodland and bushy grasslands. The ecosystem provides for about 56 different species of mammals including the White Rhino and buffaloes and variety of terrestrial birds numbering nearly 250 species. It is best known for its thousands, sometimes millions of flamingos nesting along the shores, but the number varies with water and food conditions and the best vantage point is from Baboon cliff. In  2009 the number of black rhinos was more than 25, one of the largest concentrations in the country and around 70 white rhinos. There are also lions, leopard, hyenas in the park. 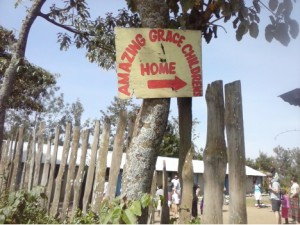 Margret Wanjugu Mwangi and her family started their charity work by providing a food program for children in need in 2008. The food came from their own granary and until they had no food left, even for themselves. As a result they had opened a small shop to help them with the small food program they started. They realised that those worse affected were the children and aimed to start AMAZING GRACE CHILDREN HOME. Anna Wanjiru made the house available to accommodate the children in need with shelter and a place where they can call home. When we visited there, the home had 25 children, 20 girls and 5 boys .The Amazing Grace Home family continues to freely share their experiences with others and will create support programs that will help many more disadvantaged children .

“If you want to feel the heart of a Nation and its soul, first you have to get off the main street, second you mustn’t read the gutter and gossip press”

It’s where I draw some of my inspiration!

After spending over two hours donating some food stuff at the children orphanage and everyone exhausted after playing with the kids it was that moment we all hate,  saying goodbye, and I tell you it was not easy leaving that place! The kids are lovely and we were all touched even some of the group decided to sponsor some of the kids.

A walk on the wild side is exactly what this two Irish girls decided to do in Hells Gate National Park, Elsa gate is right behind  them and from here they walked about 8km up to the rangers post and then back so 16km in total. They also managed to explore the  gorge where they saw some hot springs. They said they had a great day and very worth it. Those who went cycling loved it too and they were all back at the camp by 1pm although it was an early  start.

Later today I am handing over the trip to Kanyo because I have to go back to Nairobi with Patrick so that I can have enough time to apply for my South African visa. 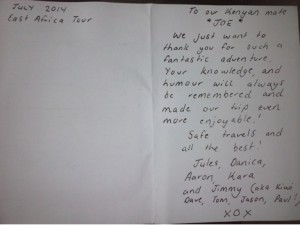 A trip to remember

Thanks so much guys for the beautiful card I do really appreciate this, to be honest, it has been a great trip and we saw so much in a very short time, this will be a trip to be added on our long list of memories. 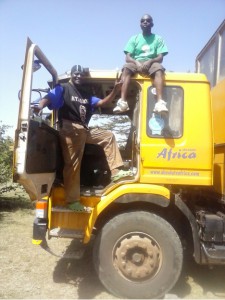 This entry was posted in h) 8th July 2014 Face of Africa with Joe & Angelo on Sparky. Bookmark the permalink.