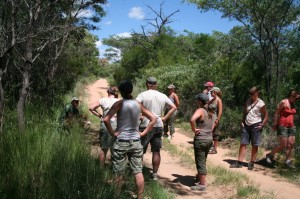 We leave Antelope Park early to make it early to Bulawayo & the Matopos National Park.  The park is just outside the city of Bulawayo and the park is not much larger than 100SqKm.  It is where Cecil Rhodes is buried and the birth place of the Scout movement.  The park has the largest density of leopard in Africa and is home to the both black and white rhinoceros. 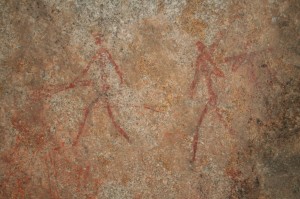 We start the day with a highly informative talk at one of the many ancient bush paintings that exist within the park. Our guide for the day, Ian Harmer, from ‘African Wanderer’ is extremely passionate about the park its history and wildlife within it.  This passion rubs off on the guys and they are glued to every word he says.   Well, the dude must not be too bad if he got voted 4th for the International Guide of the Year Award.  The caves he treats us to were off the beaten track and unknown to the general public and it was a pleasure to be one of the few to visit this historic site and learn about the bushman and their culture. 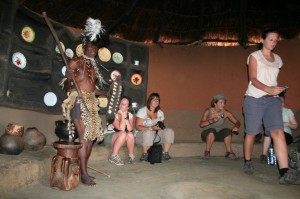 Anyway, we carry on for the day and visit a village surrounding the park. The people from this village are from the Ndebele tribe and we get told stories by the village chief and let me tell you he is a real character.   His laughter just brings a smile to your face and you cannot help but enjoy his company and hospitality.  His offer on 2 of the single Kiwi girls for marriage was quiet tempting and I know the girls were willing but I just could not work out how I was going to explain that to my boss.    So it was better to decline. 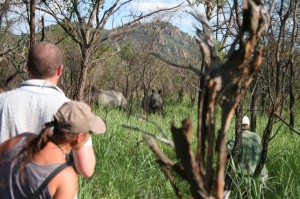 The highlight for the day was the rhino walk.  Ian would get us out of the 4X4 to start trekking rhino on foot and see how close we could get to these prehistoric beasts.  When dealing with wildlife you need patients and if you wait you will be rewarded, and rewarded we were!  We saw two adolescent white rhinos, a male and female, at about 15m away and then just before we departed the park a lone male white rhino called ‘Gumboots’.  We got within 5m of that wonderful animal.  There are not many things in life that can get the heart racing and being within meters from a two and half ton rhino can really help the blood flow. 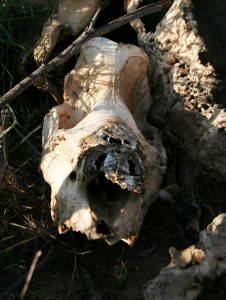 As much as the afternoon is about getting close to these wonderful animals there is also a serious side to the encounter.  We get an appreciation of the animal but also the threat they are under.  We see the carcass of an adolescent female rhino that had been poached only 2 months earlier. This park is highly guarded with patrols 24 hours a dayand yet poaching is still taking rhinos every year.  The park only has 64 white rhinos and 34 black rhinos and in the last year they have lost 5 rhino to poaching.  Worldwide poaching of these animals is on the increase and the value of their horns is also increasing and therefore threatening their future existence on our planet.   As we learned more about the species and their plight we appreciated our experience even more as we realised that these magnificent animals may not be around in the near future.

We ended the day with a greater understanding and appreciation for Matopos National Park, the local tribe, the bushman culture and the struggle of the white and black rhino.  Even though it was an early start and a long day I know it was a day that everyone thoroughly enjoyed.

Tip of the Day: If you get the chance to see rhinos in the wild, do it.