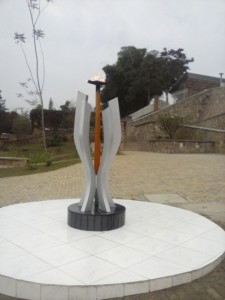 We left Discover Rwanda Youth Hostel after breakfast at 7.30am and drove through the capital city of Kigali to the Genocide Memorial.The Rwanda Genocide was of course the 1994 mass killing of Rwanda’s Tutsis and Hutu political moderates by the Hutu dominated government under their power ideology. Estimates of death toll have ranged between 500,000 and 1,000,000 or as much as 20% of the total population of the country.

After two and a half hours in the genocide museum everyone was ready to go having learned something about the events of 1994.

So after some lunch, we drove through this “Land of a thousand hills” on our way to Uganda.

From Kigali we had like 90km to Musanze, sometimes called Ruhengeri town, where one of the group had requested us to do a quick stop if time will allow us. 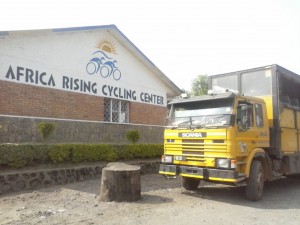 Stephen Norton has been following the Rwandan cycling team on line and because we were driving through Musanze, the group agreed we do a stop there. Africa Rising Cycling Centre is home of Team Rwanda, 4km up Kinigi Road. Jonathan “Jock” Boyer is the coach of Team Rwanda. Jock was the first American to ride in the Tour de France in 1981; he came to Rwanda as a guest of Tom Ritchey to assist with a local race.

At that race they spotted talent like Adrien and in 2007 he moved to Rwanda and has grown the program ever since.

We were met by Jock himself who took us on a tour of the place. It’s such a beautiful place to visit. After everyone had shaken his hand, we left Team Rwanda and headed for the Cyanika border. We had only 25km to the border so we were making good time. At 3.30pm we arrived at the border and an easy crossing to Uganda. 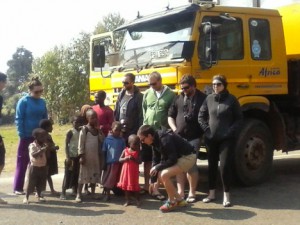 I had to give Sparky a good clean! (Sparky is our truck in case you’re wondering!)

It is a free day for everyone apart from James who is gorilla trekking a day early.

Stephen and Danica went for a run to Lake Mutanda. Tim went to see the Golden monkeys. Meagan did a visit to Batwa pygmy village.Kara and Arron went to kisoro town. 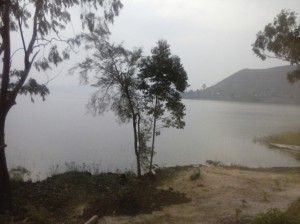 Experiencing the stunning views in Africa

Early start for gorilla trekking day! There are fewer than 900 mountain gorillas left in the world today. The world’s last mountain gorillas live in the rainforests of the Rwanda, Uganda and Democratic Republic of Congo. The area covers 790,000 hectares of parkland and massive volcanoes (some of which are still active) reach as high as 4,500 meters tall. Mountain gorillas live in family groups that vary in size from 5 to 35 members. Typically the family is made up of one or two adult males (age 12 years or older called Silverbacks),several younger males (called Blackbacks), adult females, juveniles and infants. The dominant Silverback is in charge of the group’s daily travels in search of food. He also protects the group from outside dangers, such as intruding silverbacks from other groups, poachers, and other animals.

The group returned from trekking at 4.30pm, tired but very happy having seen the gorillas! After showers everyone was ready to go for sunset dinner at Lake Mutanda. 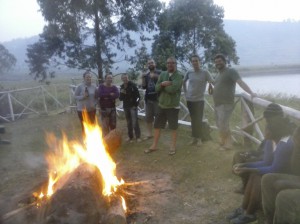 Dinner for the gang

We sat around the campfire before dinner with a cold Nile Special talking about today’s highlights. Our candlelit dinner consisted of BBQ chicken, beef kebabs, roast potatoes, yummy peanut sauce, mixed vegetables and some pineapple. All happy after dinner, we transferred back to our accommodation ready for bed after a long day of trekking.