We rose early to make the most of our final game drives, and were not disappointed. Among many other animals we saw a massive pride of 17 lions. They were all lolling around a tree in clear view of the truck – amazing!! We watched the pride laze around, playing and nuzzling each other – what a privilege to see the interactions between them in the wild!! We also encountered so much more including giraffe, hippo, gazelles, and numerous birds including Africa’s clean-up crew “vultures”. 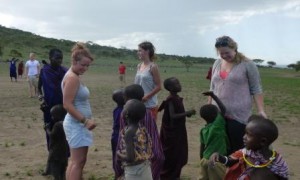 We left the Serengeti and lunched by Nabi gate before heading straight into the Ngorongoro conservation area. We stop at a Maasai village and those who were not with us during our visit to the village in the Mara got a tour and information about Maasai culture. A few Maasai were kicking a football around near the truck. It soon developed into a full on match of team Absolute vs. team Maasai!!! Those not taking part cheered with the children from the side-lines and we are proud to say we won the match – and loved the fun we had. It was a great experience to interact with the locals and we enjoyed making some Maasai friends.

We then made our way up the side of the Crater, marvelling at the views, to our camp on the crater rim. I love that campsite, both the views and the fact you are camping on the rim of an extinct volcano make for a wonderful experience – and of course the possibility of animals coming into camp at night adds to the thrill. We were a bit chilly as we were at altitude so we made a huge fire which we sat around whilst reminiscing about the trips highlight.