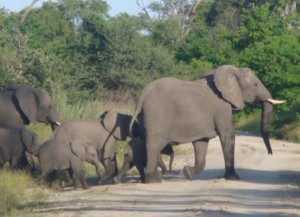 We were up at sunrise to see what other animals Queen Elizabeth National Park reveals to us. We saw a herd of elephant with very young calves, watched loads of kobs grazing and listened to the strange noises they make. And then finally what everyone has been waiting for – lion, and not just one we saw a pride of five lionesses lazing in the grass. Everyone was excited and amazed to see these stunning animals in the wild so we sat watching them for a while. 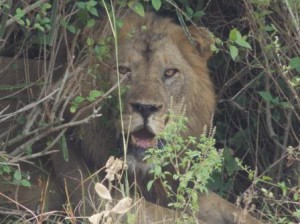 Then, on the other side of the truck, two kobs begin banging horns in a fight, and as we watched in awe a sneaky lioness crept towards them and then suddenly went for the chase! She missed the kobs but it even so it was an incredible scenario to watch. As if that was not enough, we then spotted a huge make lion. He was an old male and his massive mane and bright eyes make him look incredibly majestic. As we watched he admitted a low grumbling roars which resonate through our bodies, sending shivers down our spines and raising more than a few goosebumps!

Exhilarated by the mornings game viewing we spent the afternoon chilling out around camp and Charles and I prepared a delicious dinner of roast goat, sausages and salads – a special dinner to end a very special day.