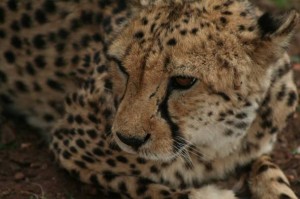 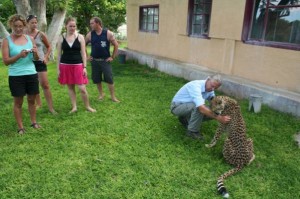 Generally cheetah populations are low throughout Africa and some years ago it was thought that they might become extinct.  This did not occur to the amazement of scientist and their numbers have increased.  However the cheetah population is still considered vulnerable with inbreeding being a real concern.  The efforts of these Namibian farmers may help sustain and even improve the genetic pool of wild cheetahs. 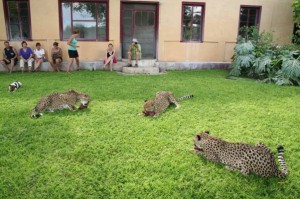 So let us get into the fun stuff, patting one of the three cheetahs that the properties owners have in their backyard, and get very close to these animals for outstanding photos.  We listen to them purr and enjoy their interest in us with licking and rubbing.  Then the cats get fed and it is time to leave them alone and let them eat in peace or. . risk get yourself a cheetah love bite!

The last activity is to visit the wild cheetah that reside in one of the paddocks.  We enter in bakkies (pickup/ute) and get surrounded by about 20 hungry cheetahs.  They chirp,  squeak,  hiss and growl at each other until they are fed. 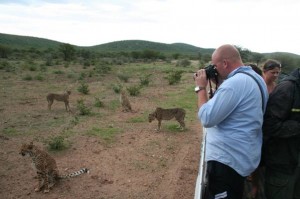 Some cheetah actually get very upset and fights can break out between them.  It is a very exciting few minutes until the cheetah all get their food and run back into the cover of the vegetation and out of our view.  There are no complaints from the guys about the afternoon.  What else would you be doing on a Tuesday afternoon?  Who thought you would be patting a cheetah.

Tip of the Day: They may look and act like large domestic cats but a cheetah is not your average pet.

This entry was posted in a) 14th Nov 2010 Absolute Safari on Shaggy, Denis and tagged absolute africa, African adventure, bakkies, Cheetah park, eat in peace or. . risk get yourself a cheetah love bite!, namibia, Namibian farmers may help sustain and even improve the genetic pool of wild cheetahs, National Parks. Bookmark the permalink.