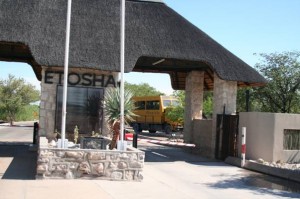 Etosha National Park is the best National park in Namibia to see game.  However in the rainy season like anywhere else in Africa, spotting game becomes more of a challenge.  It all comes down to the 2 essentials you need in Africa,  patience and time.  If you have these you will be rewarded and you will see game.

And we did see game, and game that cannot be seen anywhere else on this safari such as springbok and oryx.  These two animals are specialists in dry desert country, which for most of the year is what Etosha National Park is, very, very dry.  But for the next few months the park is green and lush with grass and other vegetation. We saw plenty of game, impala, kudu, eland, springbok, oryx, giraffe, elephant, lion, and we also saw the rare black rhino,  not once but twice! 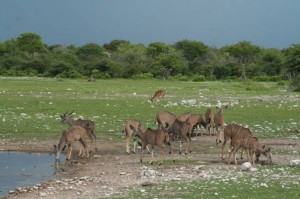 Did I mention that Namibia is also a great place to try out local game meat? Oh yeah!! And let me tell you those cute springbok are tasty animals.  However our animal for consumption tonight was kudu marinated and in kebab form.

The last morning we challenged ourselves to see one of the big cats, unfortunately we didn’t see them even though the night echoed their calls.  We did see lots of jackal, however not the one that came to the truck the previous night and stole a bag of breakfast cereal! 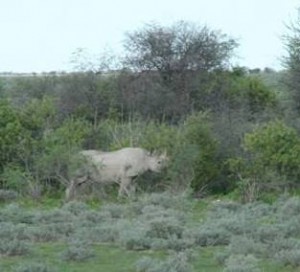 to a Black Rhino we saw munching on the Acacia bushes.  Smaller than the White Rhino,  about a ton lighter,  however still a spectacular sight considering its rarity.  It is a hard animal to spot as it prefers solitude and the cover of thick vegetation and it was a great way to finish our final game drive in Etosha National Park and our final game drive on tour.

Tip of the Day: Don’t sleep during game drives you may miss something.