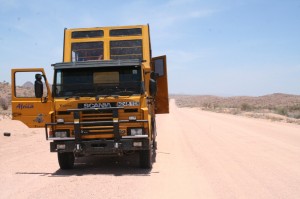 We leave the Cheetah Park to make our way to Namibia’s Skeleton Coast. The drive to the coast is very scenic and the best drive day on the tour. You can spend hours taking in the scenery as it changes from bush, to scrub, to rolling hills with sparse vegetation and then to

the flat desert land that makes up the Skeleton coast.

The name “Skeleton Coast” is derived from the fact that many whales and ships have been washed ashore here by harsh conditions in the Atlantic Ocean.   After a while driving along this coast,  it all begins to look the same,  and as the name suggests the Skeleton Coast becomes Dead Boring!! 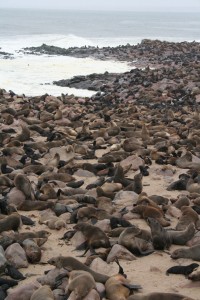 We make a sharp left turn on the salt road and head for the waves that we can see in the distance and before long find ourselves surrounded by 40 thousand Cape Fur Seals.  There is nothing out here besides the waves of the Atlantic, salt flats,  rocks and the smelly seals.   This colony always resides at this spot along the coast and it is a guarantee that you will see seals.  At this time of the year they have just given birth to pups and the shore is full of seal cows (as the females are known) and their pups.  Some pups are only weeks old and we get a chorus of seal bleating from mothers trying to find their pups and pups trying to find their mothers. However impressive watching all these seals is we are forced to leave as the seals stink and there is only so much bad fish breath that one can take!

Tip of the Day: There is nothing better than taking a deep breath of the fresh sea air at Cape Cross.

This entry was posted in a) 14th Nov 2010 Absolute Safari on Shaggy, Denis and tagged 40 thousand Cape Fur Seals, absolute africa, Cape Cross seal colony, Cheetah park, Namibia's Skeleton Coast, the shore is full of seal cows, there is only so much bad fish breath that one can take!. Bookmark the permalink.