Chris has decided to sign up for the MONSTER BURGER COMPETITION so we are all there cheering him on, but like most of his predecessors he has failed to finish the enormous feast! None the less. It was a good effort and good fun to watch. 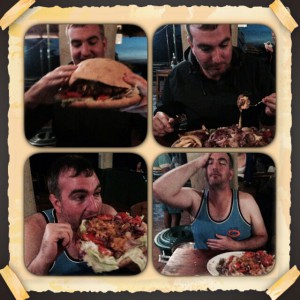 Last morning at this wonderful place in Jinja before we take off to the next place. A good time later with just a mere 80km to cover (TIA hey?) a bit of time shopping then off to Entebe because today we pick up Nicole. A veteran over-lander who had done her first overland trip way back in 2001.

We psyche ourselves up for a 6am leaving the camp, its going to be a long drive, traffic can be chaotic and all have to be extremely patient. None the less we are at the equator in good time, this time Inge is wide awake, so its happy days for all. 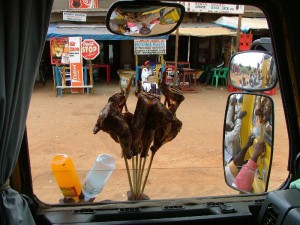 We hit the road again and while in Uganda it would be a shame if one never tried out the local foods on the side of the road… this place has some of the most amaizing goat meat, chicken and beef on a stick! If you care to be a bit more on the adventurous side… things like offal and tripe are usually available and are always a yumm yumm for me.

So rainy season and travel.. always good fun.. for those that haven’t joined in on our circuit training recently, some time pushing the truck out of a bog can make up for that!

Fantastic times tonight as children from the nearby orphanage come to see us and do some singing and dancing and everyone gets involved at the end. 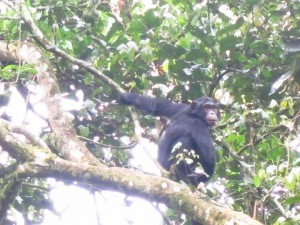 Time to Trek our cousins (Chimpanzees) as they fondly call them at Kalinzu forest. As we all know, game walks always depend on the luck of the day, today the gods are on our side and we manage quite some good sightings! For the few that remained at camp, the baboons also put on quite a show for us…..

This is only the morning and the day is still young… we head off to Queen Elizabeth National Park… and there is a 2 hour boat cruise on the Kazinga Channel. This is the channel that joins the 2 lakes, Lake George and Lake Edward. Hippos and Buffalo in abundance… if you like birds then also this place never fails to disappoint.

We then head to our camp (Hippo Camp) I think the name speaks for itself…. A few managed to see these water giants as they made their way past our camp to their feeding grounds. 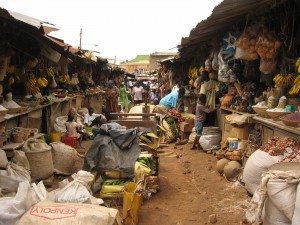 Its game drive time this morning and the hyenas gave us a great show today! Later on we saw quite a big herd of Elephants with lots of calves, Ugandan Kob and many more sittings.

The drive is long or rather shall I say its made long due to the state of the road. There is much construction happening.

I give Jade a big surprise by taking her deep into the local markets which was a great delight for her. A quick stop over for supplies then its off to camp.

This morning we have a few going up to Lake Bunyoni. There they have a chance to meet up with a fascinating old lady (87 years old) and have some time to view some of the 29 islands that are on the lake. Later its off to an orphanage where some of the ladies come back with different hair do’s styled by the little ones! The a boat ride visits a few islands, the most famous being Prison Island, rumour has it that in olden days girls that fell pregnant out of wedlock were left there to die! As you can imagine most Africans are not able to swim, none the less, this created a great opportunity for all the guys that couldn’t afford to pay a bride price, they would simply go there and get a bride. Who knows if it’s true….

The boat ride takes us downstream amongst some spectacular scenery. Our drive up to Kisoro is exceptionally scenic with views of the Virunga Mountains as we approach town. We get there in good time and most have the opportunity to have a bit of a wander in town.
Day 17

Today has been a relaxed day for most except for Nicole who has gone off to see the Golden Monkeys and also Hayley, Jade and myself, who have decided not to do the usual circuits but instead I did a Zumba session with the girls! Ha ha, hate to imagine what the onlookers thought!

Most then leave to go and visit the (Batwa) pygmys which will also take them through to an orphanage. There after they go off to Lake Mtandwa for some nice serene time and sun baking.

We also welcome an additional 5 people into the family today!
Day 18 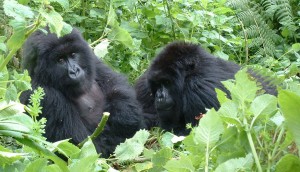 Today is THE day! Excitement is definitely in the air and all are geared up for the trek to see the Mountain Gorillas, they are in 3 different groups that go out and when they return the stories are wonderful.

One group had only a minor trek of 30mins and boom… they there were!

Second Group… 3.5hrs later finally they were there are out in the open, but just as they thought they could relax they got pestered by wasps. I can’t imagine what the poor gorillas thought with a group of Muzungus running and screaming in all directions because of a few wasps, but I am glad to say it was all laughter when they recited the story and everyone got out of it with only a few stings but a great story to tell.

The third group had 2 guys that travelled back to Africa for a second time mainly to see the gorillas and unfortunately they are the ones that had it the hardest. All the way up steep terrain and the gorillas were deep in the thicket, all they saw were some rustling leaves so the rangers took them back to trek another family, and second time lucky as they managed to see them before long, and upon finding them, the first steep trek was forgotten!

It has been a fantastic day for all and there is a unanimous agreement that it definitely was worth it!

This entry was posted in i) 24th August 2014 Wildlife and Spice Island with Vee and Angelo on Sparky. Bookmark the permalink.