So we come out of the Delta and overnight again in Maun. 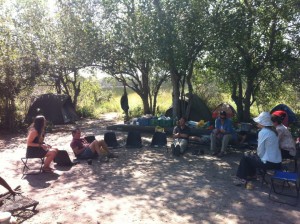 Camping in the Okavango Delta

For some of the team on the truck, the Botswana Namibia border crossing was their eight immigration stamp in their passport since being on safari.

At lunch under the huge flowering fig tree, I explained to my guys to be prepared for delays at the border crossing into Namibia. I was still waiting for my work visa to come through which is done from the authorities in Windhoek. However it was quiet on the border and we had no problems at all. Almost premeditated, my visa was there waiting for me at the border post.

Only 15 km down the dirt road through the national park, we pull into Rainbow Camp for the night. Perched right by the banks of the Kavango River, right in time for sunset and a sundowner!

Sunset is such a great time of the day. It’s a chance to reflect on the day just passed, and in this circumstance, the beautiful settling and geographical location – just a stone’s throw from Angola and the Caprivi Strip on the other side of the Kavango River.

Elephants were on the river bank bathing, hippos rising in the middle of the river, a loan crocodile is sun-baking in the last of the day’s rays. 3 young boys come drifting past in a wooden dug out canoe. 1 of the boys paddling, another bailing water and the third trying his luck with a hook and line.

Tomorrows a new day, we are up early making our way south to camp out under the stars next to Hobas, the world’s largest meteorite.

We travel done further into Namibia stopping off in Rundu for supplies.  We continue on into meteorite country.   This time of year in Namibia is hot days and COLD nights. But the night sky is clear and it makes for incredible star gazing. The moon was new and the Milky Way right overhead while we camped around Hobas Meteorite, the largest meteorite in the world.

The next day we head the hundred or so kilometres to the famous Etosha National Park. 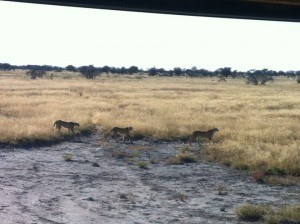 We set up camp and have a laze around the pool before heading into the park for our evening game drive.

As usual, Etosha put on quite an awesome show! In between multiple cheetah sightings and dozens of lion prides and a leopard in a tree, it was quite an afternoon in the park.

The next morning we were up early and exploring this huge expanse of Savannah skirting the edge of the 5000 km2 salt pan.  We came across large numbers of  herds of elephant, giraffe, zebra and other plain’s game.  We were lucky again with the number of cheetahs and lions that decided to show themselves today in the park.

After a delicious dinner we made out way to the water hole.  We counted 9 rhino around the floodlit Okaukuejo water hole at night. Most of us nursed a few beers around that waterhole late into the evening watching those ancient, endangered and incredibly rare animals at play. 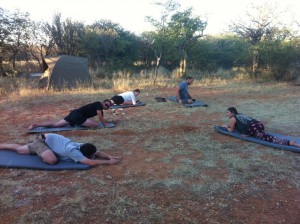 Yoga, camping at the Cheetah Park

After a game drive we headed south to the small town of Outjo. We stop off for German cakes, internet and shopping before heading off to our next destination, Cheetah Park.  This afternoon the guy got to head down to the farm house and get up close and personal with the 3 domestic cheetahs that live with the family.  After that it is off to the enclosure where the rescued cheetahs are looked after and need to be fed. Its quite a sight to see as we head off on the back of our trailer to dish out dinner.

In Namibia, scale becomes very apparent and we feel so small and far away in our overland truck. You imagine looking at us from above, just a tiny yellow spec crossing alone through the Namib Desert. The adventure is part of the experience, and driving these dirt roads, it was no surprise to anyone that we have had three blow outs! All hands on board while we jack the truck up and rotated and changed the tyres. Just another day on the road overlanding through Africa. 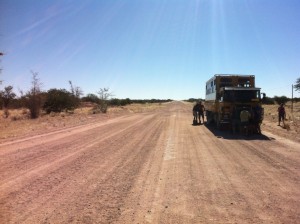 Blow out on the truck

The last week has been quite a journey. We have covered more than 1,800 km since leaving Maun, camping out under the clear night sky, camp fires and BBQ, beers and national parks, mind blowing landscapes, blowouts, dusty roads and finally…. We have arrived in Swakopmund!!