With no incidents in the night, no need for zip lock plastic bags (you will have to ask those who have been on safari about the need for a bag at night in your tent when times are desperate!?)  and our guards having no stories to tell of close encounters, we had an early start for our morning game drive in the Masai Mara.

Our early start was rewarded by the sighting of 3 male cheetahs on the road not far into the park. We waited in anticipation as they began to assume a stalking position, only to discover that they were being extra cautious due to the presence of a large male lion looking to protect his patch. The lion jogged over and the cheetahs fled.  Even three of them would not take on a male lion and there was no point hunting as the lion would enjoy their labour by stealing their kill. 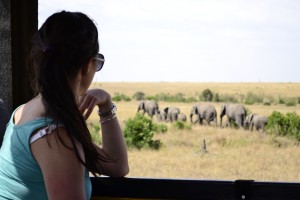 We continued on through the park in anticipation of we would see next. The other highlight of the morning was encountering 5 lionesses with 9 cubs (the same ones from the day before), the cubs were a bit more active today with one trying to practice a kill on a guinea fowl – they were all very cute!  We were graced by a herd of elephants and giraffes all in search of water.  Unfortunately no leopard or rhino, fingers crossed for the Serengeti!

After leaving the park about midday, we headed on the bumpy road back to Nairobi. We finished the evening off with Goodluck’s delicious version of Nyoma Choma, a few Tuskers and a game of Pictionary.

One of the group came up with the following picture… needless to say we didn’t get it…. but the answer was ‘Turkey’. When we didn’t correctly identify the bird, rather than drawing a Christmas tree, he thought that the next best option was a draw a kebab… a ‘turkish kebab’ (or maybe a Masai shield).  There may be a petition to rename Shaggy, Turkey in recognition of this fine piece of art work!!

Lots of laughs – a fun way to end a great day.