A very early start this morning so we can get to the Mara in good time.  A few snores were heard from the truck this morning as we made our way to the first stop on our journey, Narok.  Here it was time to grab the best samosas outside of India. 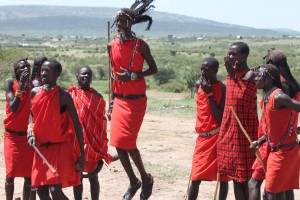 A short drive to the turning onto the road to the Mara, seatbelts needed to be tightened as it was a very bumpy road!!  After about two hours we arrived at the Masai Village.    After a welcoming dance by the resident warriors and local ladies it was our turn to join in.  We had interesting talk and walk around the village, discovering the lifestyle of the Masai villagers.

It was then time to enter the park.  Our first animal encounter was with, zebras and topis.  Time to keep our eyes peeled for some of the big five. 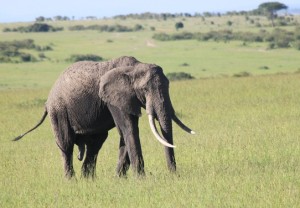 The first one was a group of elephants including some very small ones who were searching for water in the very dry landscape.  We continued on through the park, there lying under the shade of some bushes were a pride of lions with nine cubs.  It was an awesome sight, even more so when we spotted the male lion lying amongst the grass on his back with his legs in the air!!!

These were very last lions we spent a bit of time with them and then continued on through the park.  Unfortunately due to it being so hot a lot of the animals were taking shelter although there was still an abundance of gazelles, zebras and topis.

We headed just outside the park gates and to our camp site on the Talek River.  With our Askari protecting us for the night we listened to the noises of the local wildlife wandering around us.  Let’s hope we all have a peaceful sleep!!