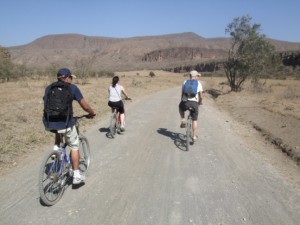 This morning we headed off at 8am to Hells Gate National Park on mountain bikes.  It was a tiresome uphill ride to the park but a cruisy downhill ride once inside.  We first came across a male giraffe within 100 metres of entering the park.  A great start to the day, and we quickly came upon warthog after warthog.  The zebras were the same, as it seems both animals live closely together.  Both had very cute babies running along with them, hiding from the bicycle gang.

No cheetah or leopard were seen, probably too lazy to check out who had the brightest pink top.  Once we made it to the picnic area, we made a few quick pit stops and a solid rehydrate before tackling the Hell’s Gate canyon.  Our guide told us it was a challenging yet fun walk, he wasn’t wrong.  Up and down walls, man made ladders (broken trees) and across streams we went.  We stumbled across lots of natural springs and surprisingly the water was boiling hot as we were all looking for some cold water to cool down.  We were told the story behind Hell’s Gate but I won’t spoil it for you. 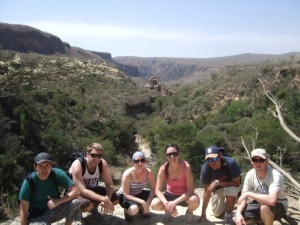 View from top of Canyon at Hells Gate

Along the way we had our first encounter with a dangerous animal, a Cobra.  Luckily it was more scared than us and ducked into a hole in the rocks, otherwise it was game on.  We reached the end of the canyon and a steep climb straight up was next.  We were well rewarded with a beautiful view from the top (see picture).  We hoped back on the bikes to begin the arduous journey back. Our first set back was a puncture which meant a wait on the side of the road for 20 min whilst this was fixed. As we rode further and further, the dust and heat hit us bad. Water was at a bare minimum and plenty of rest stops were had. Once we reached the front gate, an icy cold coke was the most refreshing thing I had ever tasted. Well done to all that completed it!

The afternoon consisted of laziness, by the pool or lying down in the shade (for those who had sunburn from the bike ride) in temperatures exceeded 35 degrees Celsius. As we cooled down with the sun setting, the smell of Good Luck’s food meant beer & cards time. A competitive game was won by me before we called it quits for dinner. Pumpkin soup tickled the taste buds as a starter, followed by tasty BBQ chicken & chips.

After an exhausting day, an early night was had, as some prayed for an England victory in the football.