We had to be organised this morning  as we had to transfer belongings into the 4×4’s ready to head off to the Serengeti.  A few hours drive and we were at the park gates and fortunately the rains had stopped it was time to see what we could find. 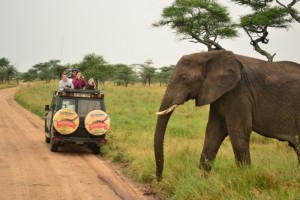 After a short drive we came across the first of the big five a family of elephants who got pretty close to the vehicles.  Next was an abundance of wildebeest and another of the big five the Buffalo.  A pride of lions were then seen lazing around in the long grass.  It was a pretty good start to the game drives.

We set up camp inside the park boundaries and had an enjoyable dinner around the camp fire.  It was a night to be alert as anything could wander through camp. 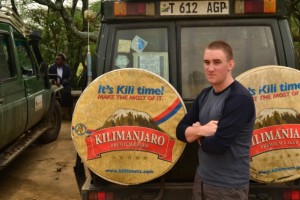 We were up when the stars were still out to get on our way with the early morning game drive.  The first animal we came across was a spotted Hyena lazing in the grass looking very well fed!  Again there were plenty of elephants and giraffes around all happy with the fresh supply of water to their watering holes.  Again we saw the lions that we had seen the previous day but this time there were two male lions. Maybe time for a change of leadership in that pride!

There were plenty of antelope and zebras around again and we even had the sight of the mating ritual of two zebras (very romantic!).   We had still to spot that elusive leopard and Black Rhino.  We were not giving up!  Determination was the call of the group for the day. 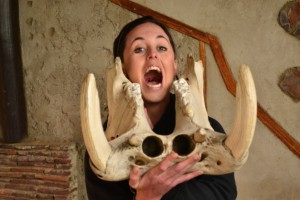 We continued our search throughout the park but to no avail maybe tomorrow will be our lucky day!  We stopped off at the Information centre where some of us got had fun photo’s with the skulls of various animals and then it was time to head out of the park.

It was now time to drive the few km’s to the Ngorongoro Crater.  It was a steady drive up to the top of the rim but unfortunately the cloud and mist had settled and we couldn’t see down into the crater.  Another sumptuous dinner and then it was an early night after a long day and another early start tomorrow.