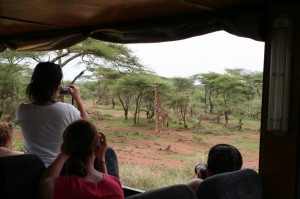 To appreciate the greatness of East Africa game parks is to understand their connections to each other. The Ngorongoro Crater is joined to the Serengeti and the Serengeti joined to the Masai Mara. Combined they create an area more than 20 000 sq km which is teaming with wildlife.  These parks are the highlight of any safari within East Africa and a must when this part of the world is visited.   Luck for us we visit all three! 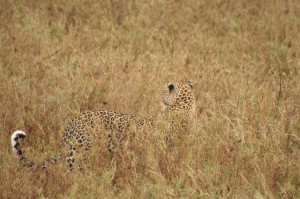 The Serengeti National Park constitutes the largest land mass out of the three parks and is home to millions of mammals.  The most notable are the wildebeest and zebra that migrate yearly and are known worldwide due to countless numbers of documentaries that either directly or indirectly focuses on these animals.  Without these masses of animals there would not be the plethora of predators that feed on them and give us so much enjoyment when we see them.  An example of why the Serengeti is so special is the number of lions that reside there. There are more lions found there than any other park in the world. 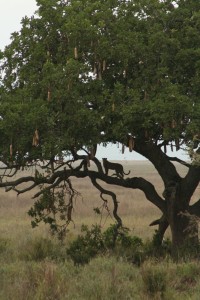 What did we see? A trip to the Serengeti would not be complete without lions and of cause we did see them. The first drive enlightened us on lion breeding.  Let me tell you it is a short affair, but very numerous.  On average, they mate 150 times in three days, but unfortunate for the female only for about 3 seconds each time.   Leopard was seen, on the first afternoon, a female feeding on an impala in the branches of an acacia tree.  The following morning she was still there munching away on the same carcass. There was another spotting (please ignore the pun) later that morning and it was seen in a sausage tree just after having its impala stolen from her by two spotted hyenas.  All she could do was watch from the safety of the tree as her days hard work was eaten in front of her.  Our patients and excessive amount of photography gave us the time to watch her leave her tree and eventually pass by ‘Shaggy’ which only led to more excessive amounts of photographing. 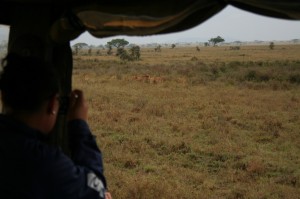 Our Serengeti experience was finalised with a pride of about 17 lions, one male, 6 females and the rest cubs.  There was excessive amounts of sleep from these lions, a short but fruitless stalk, and a playful exchange of hunting and fighting between mothers and cubs.  Nice way to finish our experience. I know I did not mention the giraffe, hippo, zebra, wildebeest, elephants and the many more animals seen while in the Serengeti, but there is only so much that one can rave on about.

This entry was posted in a) 14th Nov 2010 Absolute Safari on Shaggy, Denis and tagged african holiday, East Africa game parks, elephants, giraffe, hippo, home to millions of mammals., Masai Mara, Serengeti, Serengeti National Park, The Ngorongoro Crater, There are more lions found there than any other park in the world., wildebeest, wildebeest and zebra, zebra. Bookmark the permalink.