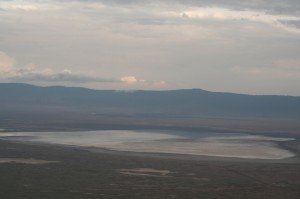 The Crater is the reason why the Serengeti and Masai Mara produce such a fertile environment for all these African beasts.  Before this volcano exploded millions of years ago it is estimated to have been between 4 and 5km high and when it did explode it collapsed on itself leaving what now can be seen as the Ngorongoro Crater.   The reserve became a World Heritage site in the late 70’s and has numerous Masai people living an ‘almost’ traditional life within this area.   There is almost no where in the world that western influence has not touched traditional life and the Masai people are no different.   So don’t be surprised when a Masai man pulls out a mobile phone and asks for your phone number! 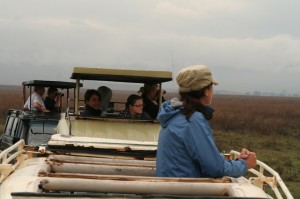 The drive into the Crater is like a scene out of a Hollywood film.  Mist at the base and a covering of cloud around the rim suggests it’s been staged to enhance our emotions.  We first see zebra, then buffalo and it’s all a little familiar as we have been spoilt in our past game drives.  However the feel is different as we are not in ‘Shaggy’ and now in small 4X4s and away from the familiarity of the truck.  But it is all good.  We see lion, that’s not unusual, but then we see a multitude of hyena.  Hyena here, hyena there, 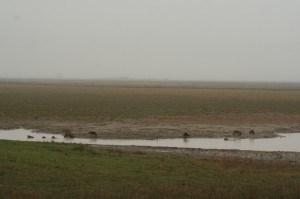 hyena swimming, hyena eating, hyena cubs, hyena walking, hyena talking, hyena everywhere.  But we had not seen it all and the pot of gold at the end of the rainbow (it was a day of rain in the crater) was the black rhino.  One of the rarest animals to see in Africa and very elusive due to its shy nature. The first view of this animal was a glimpse of a horn, ears and a back.  Then later to our excitement a black rhino was seen again but this time it removed itself from the coverings of the tall grass and the complete animal could be seen in all its glory.  We had now seen the ‘black rhino’ and the hardest member of the ‘big 5’ to see in the wild! 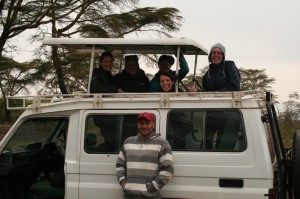 The absolute ultimate safari experience was had in both the Serengeti and Ngorongoro Crater and drained all passengers on ‘Shaggy’.  The experience and early mornings took its toll and the truck snuck into Arusha with heavy eyes and the quiet hum of muffled snores.

Day 25 saw Christine adorned with the chain of shame.