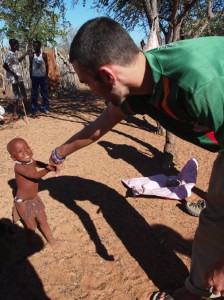 Leaving the Cheetah park we headed for a totally different experience – visiting a Himba village. Because of the harsh desert climate in the region where they live and their seclusion from outside influences, the Himba have managed to maintain much of their traditional semi-nomadic, and mostly pastoral lifestyle. We got a glimpse into that lifestyle– including the way the women bathe without water, using smoke. Traditionally both the men and women go topless and wear skirts or loincloths made of animal skins. Adult women wear beaded anklets at least in part to protect their legs from venomous animal bites.

We then headed for Spitzkoppe and one of the most amazing nights on the trip. In Spitzkoppe we camped on top of a really, really high boulder. The hike up with all of our stuff was quite a journey – but totally worth it. Sleeping out in the open under the clearest sky full of stars was really amazing. 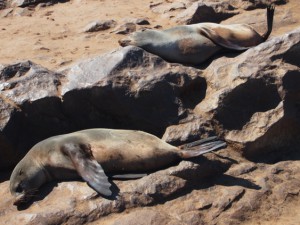 Next morning we left our campsite on the boulder and drove to the seal colony on Cape Cross. Despite the seals being really cute – we couldn’t stand to be there longer than an hour due to the horrendous smell they give off. So we moved on to our next stop Swakopmund. Swakopmund is a picturesque German town along the coast. With real beds, real bakeries, restaurants and bars where we are to spend the next three enjoyable days and nights.