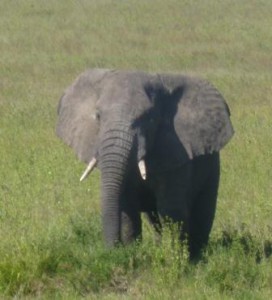 We were up and ready early and headed straight for one of the highlights of the trip, the Ngorongoro Crater. After winding up the hills in the truck to town, we met up with the 4×4 vehicles that took us down into the crater.

I love the history of this special place. It was created when the volcano erupted and collapsed in on itself. The large caldera that was formed has a constant water supply with the result that it hosts a myriad of wildlife all year round. You can see why this place is known as the ‘Noah’s Ark’ of Africa!

As we made our way up the side of the crater (it is about 610m high, and 2400m above sea level) we saw plenty of Maasai herding cattle. The Maasai are a majestic sight in there colourful clothes and traditional jewellery. Once inside the crater the game viewing began and before long we had seen giraffe, impala, wildebeest, lion and elephant. It was an animal packed day and a great introduction to Africa! 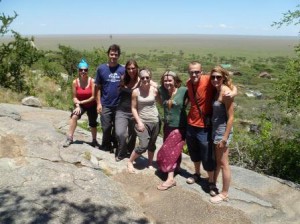 We returned to the rim of the crater, to one of my favourite campsites. The views are amazing and you really feel like you are in the wild of Africa. It gets chilly at that altitude so we lit a big campfire to keep us warm. Not long after everyone had gone to bed, I heard the soft noises of animals close by. A quick peek outside with my head torch revealed a herd of about 30 buffalo grazing nearby! This camp is often visited by animals at night – but the buffalo are a special appearance. I lay back in my sleeping bag, and blissfully dozed off as the buffalo grazed their way right past my tent!