On the plains of the the Serengeti ,  Isaac our driver, did an amazing job of finding us all the animals we could want to see, 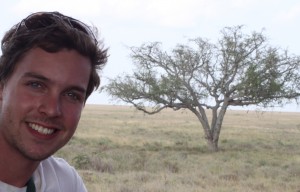 including the elusive leopard we had been striving to see.   Lucky for us this leopard had recently killed and there was a half-eaten gazelle in the tree beside where it was lolling in the tree.

Isaac wasn’t the only one in our group with eagle eyes, one of the lads spotted something in a tree on the way out of camp, it turned out to be a dead Thompsons gazelle.   Either that gazelle got such a fright that it jumped 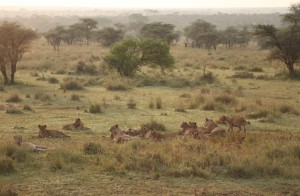 high into the tree and couldn’t get down and died, or the much more plausible explanation would be that a Leopard took it up there.

We returned to the tree a number of times and searched in  vain for a sighting of the killer.

Next morning we once again returned to the tree  – there was still no leopard to be seen but there was no trace of the gazelle carcass either! 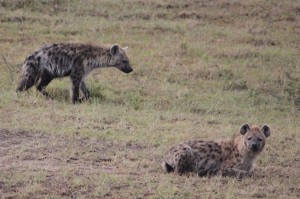 Isaac then showed us a pride of lioness with their cubs, on a wildebeest kill.  We took some time to watch the pride.   Later, once the lions had moved off some cheeky hyenas came and stole the carcass.