A great time to visit East Africa is the short dry season/summer season which lasts from the middle of December until the middle of March.

One of East Africa’s biggest spectacles, the wildebeest migration, is in the Serengeti during this time of the year with the herds spreading across the “endless plains” as far as the eye can see.

Calving for most species takes place in January and February ready for the long rainy season which then gives plenty of food for all the new additional babies.

So during this time you will see lots of young and if you are lucky you might even witness a birth!

Due to this it is also an excellent time to see the predators in action as well as vulnerable young and weakened mothers provide plenty of easy food.

For bird watchers this is a good time too as a lot of migratory birds are migrating to east Africa during this time. Flamingos can be at their best numbers here during the hot dry months of January and February as well.

The days can get quite warm but the nights are perfect for star gazing due to few clouds and a great temperature. Some showers might still occur in the afternoons or nights keeping things fresh and cools everything down after a hot day. 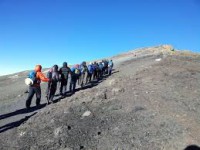 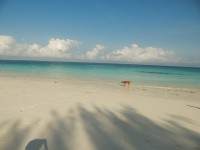 To top off your trip you can relax on one of the beautiful beaches on Zanzibar or the Kenyan coast where it is great weather to catch a tan and go swimming and diving. For diving the waters tend to be clear this time of the year which makes for good viewing.

We hope to see you soon on one of our trips departing December to February!