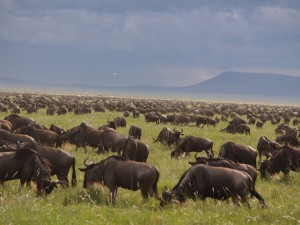 During the months of December through to March the famous migration has returned to the plains of the Serengeti and the Ngorongoro Conservation Area where the short rains have brought fresh lush green grasses for the Zebra, Wildebeest and Thomson’s Gazelles to return to from the Masai Mara as part of their great annual migration.  It is in the area between the Conservation area and the eastern side of the Serengeti that these migratory animals congregate in huge numbers and graze at this time of year. 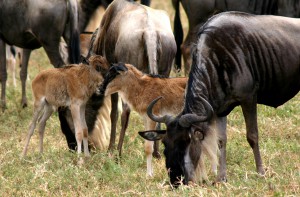 Approximately 1.5 million animals have returned and many of the females may be pregnant, ready to give birth usually from January through to March, timed perfectly so these youngsters will be strong enough to be ready for the return journey to the Mara come June or July.

Over the next three months from late December we have a prime opportunity to  see so much in the Serengeti and its gorgeous surrounds.  The numbers of animals including weakened calving mothers and increasing numbers of vulnerable young make it also a great time of the year

for viewing other animals too, particularly the park’s predators including lion, cheetah and leopard as well as the scavengers – jackals, hyenas and vultures.   Lions can be often seen lazing full-bellied in the grass surrounded by wildebeest and zebra –  too full to even contemplate moving.

Arriving around midday at Naabi Hill Information Centre for lunch, we head out on safari through the afternoon, quickly adjusting to scan carefully to seek out for relevant details in the landscape – differentiating between boulders and rhinos, leaves and leopard spots and sandy patches that just might actually be a lion sleeping on the edge of the track in the distance…Game drives are about luck for sure…but with the help of our experienced and knowledgable guide we can come away having seen so many animals in this park that teems with wildlife at this time of year.

As the sun sets over the 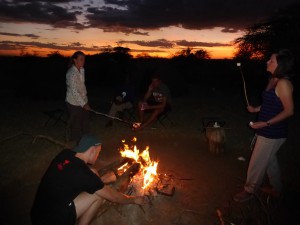 horizon at the end of our game drives we head to the central area of the park to camp for the night. Our cook prepares dinner.  The noise of the park animals break the tranquil silence as we enjoy an evening around the camp fire before heading to the comfort of our tents, settling down to sleep tonight in anticipation of what tomorrow will bring.

The following morning we are up as dawn breaks over the plains.  With the cook busily preparing our breakfast we help pack away our gear before sitting down to enjoy our eggs, toast and fruit. Happy after our breakfast we are back into the 4x4s to head back out in the park on an early morning game drive. With the thousands of zebra and wildebeest congregating in this area it makes for a great photo opportunity! 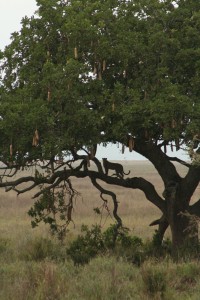 With eagle eyes open this morning we head to the area of the park that is home to the elusive leopard.  We keep our eyes firmly set on the branches of acacia and sausage trees looking out for the loop of a tail or the slight movement in the tree from these beautiful animals.  At this time of year it is also common to see them hiding in the undergrowth, hoping that they too will find breakfast from the abundance of gazelles and many young that are around.

Heading out onto the open plains, it is not only the antelope that enjoy the green grasses and leaf filled trees, this is also the perfect place to spot (quite easily) the giants of the park –  the elephants and giraffes. 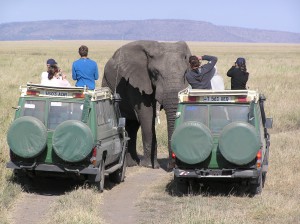 Having filled our morning with so much, we make our way to the park gates for lunch. Back in the Ngorongoro Conservation Area, we are in Masaai land where domestic cows and goats can be seen (alongside antelope and zebra!) being tended by these red-cloaked men protecting their herds from the predatatory animals that can sometimes try their luck with the domestic animals. 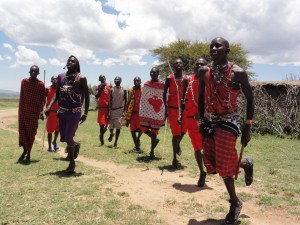 We stop off for the opportunity to visit a Maasai manyatta (village), to enjoy their traditional songs and dancing including the jumping song know as the adamu dance, during which the young man or warrior who can jump the highest has the first pick of the prospective girls from the nearby villages.  After learning about their traditional cultures and lifestyle we head up to the Crater rim.  As we climb we watch for wildlife, especially giraffe delicately picking off the leaves of the acacia trees. 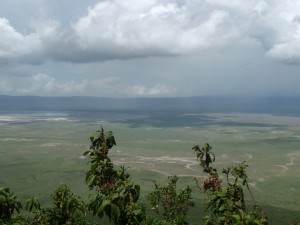 As we reach the edge of the Crater we have spectacular views down onto the Crater floor. The sun sets over the Crater rim on the next night of our safari. Temperatures can drop, whilst the stars on a clear night can be breathtaking, as we enjoy another safari dinner.  Our guide reminds us to take your torch to watch out for zebra and buffalo when heading for the toilet. Guards keep watch for us as we settle to bed for another night under canvas in the wilds of Africa.

We are up before the sun comes up the next morning to again jump into our safari vehicles to head the 600 metres down onto the Crater floor. Part of the drive has very much the fe 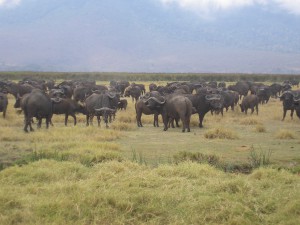 el of Jurassic Park with dense undergrowth and thick vines hanging in the misty early morning air, as we wind our way down the track.  Giraffes pop out of the foggy morning and male buffalo lift their heads, seemingly grumpy for being disturbed as we pass by.

Once down on the Crater floor, we now have an amazing view of this perfectly intact Caldera that has been part of this landscape for over 2 million years formed by a volcanic eruption.  The original size of the volcano was estimated to be 4,500 meters in height before its eruption and collapse – it now stands at approximately 2,400 metres above sea level.

The Crater floor is a maze of tracks for game driving with the chance again to see Africa’s Big 5, as well as zebra and wildebeest having returned to the Crater for the fresh grasses.  Durin

g December to March too there is the high chance that the Magadi salt pan is filled with water which also brings the sight of the colourful pink flamingos to the Crater. 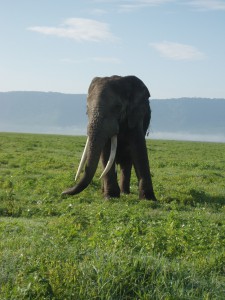 Into the Lerai forest of the park giant fig trees bear their fruits. There may be a chance to see leopard sleeping in the trees.  Here we also have the chance to see black rhino sheltering in the thick bushes. We stop over at a hippo pool during the morning, and also watch out for the famous lone bull elephants with their huge tusks that are found here, as well as the lion – the predator that is top of the food chain – that hunts across the Crater floor.

Back to the Crater rim, we have lunch before our drive down to Karatu and then 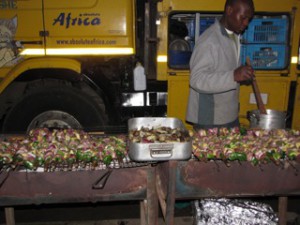 on to Arusha, catching a glimpse of Lake Manyara on the way.  We stop at a local Masaai market where you can buy yourself a curio to remind yourself of this special destination if you wish, before returning to camp where a welcome hot shower, salads, cold drinks and barbecue awaits – a great way to finish off a wonderful time in this destination when it is at its very best!